Artist and photographer Nicolai Howalt here takes us through a selection of his spellbinding work, including photos of young boxers before and after their first match, abandoned car accidents and starry formations of ashes left behind after a cremation.

Howalt started photographing as an indirect result of his parents’ divorce when he was four, after which his father moved to Africa to live with his new wife: “During all those years when I was living at home, my mother didn’t talk nicely about my father…but when she did say something nice, it was that he was quite good at taking pictures.” When Howalt began photographing as a teenager, it gave him a sense of being connected to his father.

The series ‘Boxer’ (2000-2003) derived from the fact that Howalt has never forgotten his first boxing match: “(It) wasn’t about boxing. Something else was at stake when, at the age of 13, I entered the ring – and was all alone for the first time.” Howalt then set out to portray young amateur boxers just before and just after their first fight, and discovered that the biggest difference from photo to photo wasn’t the bloody marks but the expression in their eyes: “Afterwards, there was a sense of enormous redemption.” The boys are in their very own space where they have been faced with their own fears, and whether they have won or lost isn’t always clear.

For ‘Endings’ (2011) Nicolai Howalt took pictures of the ashes that are left when a person is cremated – 90 per cent of which consists of the chemical element Strontium, which is imperishable. Howalt was fascinated by this consistency and also by the fact that when he placed the ashes in certain formations, it looked like a starry sky, and an intriguing connection between stars and human beings arose.

“Are beauty and horror so far apart?” ‘Car Crash Studies’ (2009) is an investigation of the things that both attract and repel us. Like ‘Endings’ this work also deals with death. The pictures are of car accidents – some of which have been fatal. Howalt does, however, not feel that he is particularly obsessed with death: “It’s as much about life.” Moreover, he never knew exactly what the results of the particular car crashes were: “(…) the car acquired a complex privacy, which was transgressive to document.”

In his new ongoing project, Howalt has photographed chemical elements onto untraditional material such as plates made from various metals (that are also elements), e.g. iron and copper. Here the process of making is as important as the motif itself. As an example, Howalt uses his hands when handling the plates, which leaves clear traces on the artwork – which he appreciates: “Something imperfect is added that results in a different kind of ‘life’ that I miss, perhaps in general.” 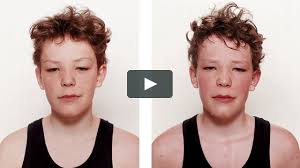